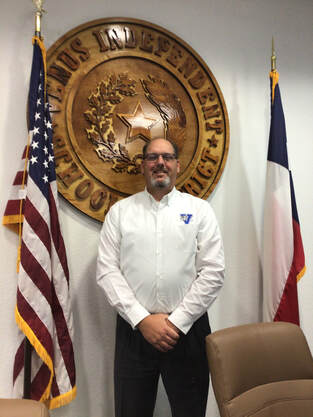 Chad Sutton was elected in May 2019 serving as Vice President from 2019 to 2021 and currently President. The Sutton family comes from years of serving the Venus community. Overall involvement includes serving on the Venus Youth Sports Association in various leadership roles over 9 years ending in 2016. As a volunteer of the VYSA, he was an active community advocate for improving the community parks within the City of Venus and working closely with Venus ISD for support using athletic facilities for our community that has limited recreational resources. Since 2008 he has proudly served as the spirit crew for every home and away football games and continues volunteering time on the Venus Athletic Booster Club. Chad has spent 23 years in financial communications holding various positions with Donnelly Financial Solutions. Currently, he is a Senior Pricing Analyst that manages public and private companies dealing with regulatory shareholders communications and SEC compliance. Chad has been married to his wife, Kristi, for over 26 years and moved from Cedar Hill to Venus in 2005 to raise Venus ISD graduates – Taylor, Caden & Colten.

Tasha was born in Bogalusa, LA. and was an Air Force brat, with that she moved around a lot. Tasha lived in Okinawa Japan from the time she was 11 months old to 5 years old. She then moved back to the US and lived in Bossier City, LA until she was 9 years old. Tasha then moved to the DFW area and finally settled in Mansfield, Texas when she was 12 and that is where she graduated high school. Tasha attended Tarrant County College and also Northwood University.

She is married to Randy Gore and has two sons. One is 20 and the other is 17. Both of her sons started in Venus as kindergartners. She has been an HR professional for over 23 years. Tasha is currently the HR / Safety Manager for McLane Classic Foods in Burleson, TX. Her husband owns a family business that has been in Venus since 1983.

Tasha’s goal for the school is to make sure that all students graduate and that we are successful in preparing them for whatever they want to do after graduation. She wants one of the reasons that people move to Venus to be the awesome school district.

​Gregory Hoffman has lived in Venus for 41 years and had been married to his wife Teresa for 33 years. They have two children named Sarah and John and in 2022 all four of them will have graduated from Venus High School. Right out of high school Greg attended UTA, and later in 2008 received an Associate Degree from Hill College. He worked as a shop manager for eight years, owned and operated a carpet cleaning business for 22 years, and finished working for Pier 1 Imports for another five years.

His community service for Venus includes serving as President of Venus ISD School Board, Lion's Club, and Venus Chamber of Commerce. Greg and his wife have supported multiple youth groups and have served on many committees. After serving nine terms on school board, and living with three generations of educators, he believes that he has a unique perspective on education. His father retired from teaching at Venus ISD and his wife has been a teacher for nearly thirty years. This is a driving force for Greg to work with the board and growing community to build pride and success in the City of Venus and Venus ISD.

Gerell’s whole life has consisted of a 15 mile radius with Venus being the center. He was born and raised on a farm on CR 506. Gerell is the seventh of nine children of Bennie and Edna Leonard. He was raised to work hard, and to put God first. Gerell graduated from Venus High School in 1985. He has been employed at TXI/ Martin Marietta for 30 years. He has farmed the land in Venus for himself and others for over 25 years. As a result, he believes in our agriculture and CTE programs. He understands the value of these programs and the future it offers our students. He was instrumental in getting welding equipment for our new welding lab by acting as a liaison between our district and local businesses. Gerell has been married for 27 years and has four children and 3 grandkids. He loves to spend his time with God, family and farming. Gerell strives everyday to glorify God; he truly believes that a man's word should be his bond.

Joe Russell is a fourth-generation Venusite. His paternal grandfather was a doctor who served Venus in the late 1800s and early 1900s and his maternal grandfather owned the local grocery store. Joe is a member of the Venus High School graduating class of 1962, was married to his wife for 46 years and has 2 children who are both graduates of Venus High School Joe spent 40 plus years in the sewing business and manufactured cheerleader uniforms. For the last 6 years, he has been a local auto repair shop owner. Joe served on the Venus Fire Department for 25 years, and continues to be heavily involved in the church and community. He is currently serving as president of Venus Community Board.

Joe originally ran for the school board when his children were small. He saw a need for improvement and felt he had the passion and some skills that could help accomplish those improvements. Joe has been involved in hiring and working alongside 9 superintendents. He has worked with the community and architects to construct all the facilities that VISD enjoys today. After 36 accumulated years as a trustee Joe still has the passion to see VISD improve facilities, offer more classes and overall serve the kids and citizens of Venus.

Kirby Sansom has resided in Venus, Texas, since 2007 with her husband and two children. Kirby originally grew up in Rio Vista TX, and graduated from Rio Vista High School in 2001. She understands the small-town sentiment while focusing on big town growth. Kirby has worked in corporate banking for the past 15 years as an HR professional in Employee Relations.

She is an advocate for children with disabilities. Her own son is on the Autism Spectrum and has taught her how important it is to be the voice for all children with specific needs. Kirby has volunteered with many organizations in the community, most recently as co-director of the VYSA Basketball board and PTO president at the Primary Campus. She has also volunteered her time to organize various fundraisers and school events that not only give back to our youth but also cultivate school spirit. Her daughter competes in athletics and academics, and Kirby spends most of her time supporting our teams and school organizations as they continue to excel. Kirby plans to continue to be a voice for all students in the district, and celebrate each child in their classroom accomplishments and in their academic/athletic achievements.

Sorry, but there was nothing found. Please try different filters.